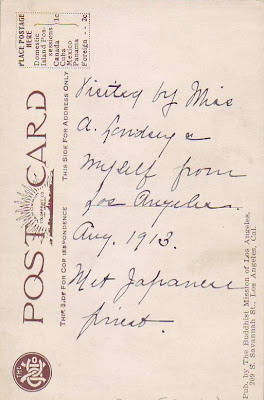 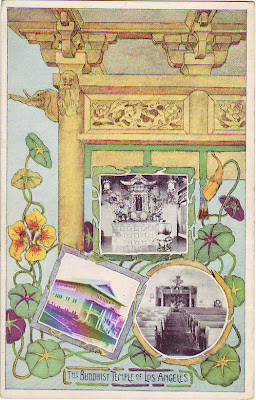 An essential component to any community is its religious life. In the early years of Boyle Heights, religious structures were almost certainly all Christian, but, by the first part of the 20th century, as the neighborhood's population diversified, so did its religious buildings.

This post shows a postcard from 1913 depicting "The Buddhist Temple of Los Angeles." The cover has what seems to be an Arts and Crafts influenced design with flowering vines and a building evoking Japanese elements, specifically the joinery above the column (Japanese influences had a major impact on the Arts and Crafts movement, which was in full flower in these years.)

At the center and lower portion of the front are three images of the temple, including an interior view of the pews, the altar, and an exterior shot of the building. The lettering in the box at the bottom is a clear reflection of Arts and Crafts style, as well.

On the reverse of the card is a short inscription in ink, reading: "Visiting by Miss A. Lindsey & myself from Los Angeles. Aug. 1913. Met Japanese priest." There is no address or stamps, so the card was likely placed in a scrapbook, in which other mementos of a trip to Los Angeles were probably placed. For many tourists, a visit to such places as the temple, or the old Chinatown where Union Station now is, or to a remaining adobe house or a local mission, was a way to experience something "exotic" about Los Angeles, whether or not the experience was any deeper beneath the surface than the chance to meet a "Japanese priest."

The temple was first sited, in 1904, on East Fourth Street in downtown Los Angeles. Three years later, it moved to Little Tokyo at a space on San Julian Street. Then, in 1911, it relocated to the Boyle Heights location at 209 S. Savannah Street (at 2nd Street.) At the time of the card's 1913 purchase, the facility was known as the Rafu Bukkyokai or "The Buddhist Mission of Los Angeles." Eight years later, in 1921, there was change to the institution, which became the Higashi Honganji Temple. Then, five years after that, in 1926, the temple moved again, to 118 North Mott Street, where it remained for a half-century. In 1976, as the demographics of Boyle Heights had changed dramatically after World War II and the Japanese-American community slowly grew smaller in the community, the temple moved back to Little Tokyo at its current site at 3rd Street and Central Avenue.

For more on the temple and its history, see the Higashi Honganji Web site at: http://hhbt-la.org/.