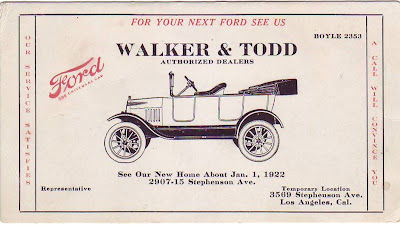 This is a small little item that no one (or very nearly) uses anymore: an ink blotter. These were just to wipe excessive ink on when people used the old ink pens with steel nibs on them, before fountain and ball-point pens came into being.


Frequently, blotters were an opportunity for businesses to advertise their good, product or service. In this case it was for an authorized Ford Motor Car dealer, Walker and Todd, at their Boyle Heights location. In fact, the blotter was issued to announce that the firm was moving from temporary quarters at 3569 Stephenson Avenue to 2907-15 Stephenson. Note, too, the old exchange system phone number: BOYLE 2353.

Finally, there is the great image of what appears to be a 1921 Model T Touring car with, of course, a convertible top! Easily the most famous automobile of its era, the Model T was produced from 1909 to 1927 and was, basically, the first mass-production car that was affordable to the "masses."


Known everywhere as the "Tin Lizzie" and the "Flivver," the Model T controlled, by 1921, a staggering 60% of the entire American new car market and over 15 million of the cars were produced in its eighteen-year run! It has been said that Ford's cost-control methods applied to the paint and that he stated that a buyer could have any color they wanted, as long as it was black.

The 1921 touring car, being a larger sedan with three doors and seating five, and which had imitation leather upholstery, a 4-cylinder engine producing 22.5 horsepower, sold for about $415. Today, a touring car, fully restored, can set you back $15-20,000.

If anyone is wondering where Stephenson Avenue is, don't bother consulting a Thomas Guide or checking Google or Yahoo maps online, because Stephenson was changed later to Whittier Boulevard, when that road was extending from the east into Los Angeles.


The temporary location was at what is the northwest corner of Whittier Boulevard and Esperanza Street, south of the 60 Freeway, north of Interstate 5 and west of Indiana Street, the eastern boundary of the city limits of Los Angeles. The new location was about six blocks to the west, between Camulos and Euclid and just north of the 60. Today, there is a shopping center where the Walker and Todd dealership once stood on the south side of Whittier.