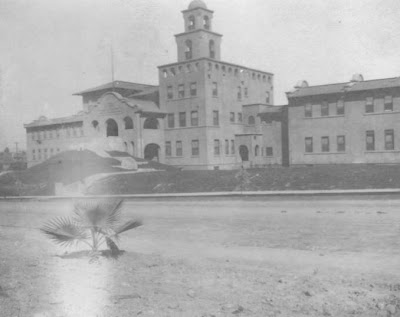 The Atchison, Topeka and Santa Fe Railroad, one of the main rail empires in America's railroading history, built a hospital for company employees in 1904-05 at 610-630 St. Louis Street in Boyle Heights. The facility, known as the Santa Fe Coast Lines Hospital, was razed and rebuilt in 1924.

The railroad used a dues system from its employees to keep the association self-supporting and, eventually, operating with a surplus. In 19th-century America, there were a number of associations and funds that provided services to members on a dues-paying basis, including burial expenses and financial support for injured or laid-off workers.

While the Santa Fe operated an emergency care facility at Needles (others were later added at Winslow, Arizona, Barstow and San Bernardino, while a full-care hospital was built at San Francisco), after which patients requiring longer-term care were sent to Los Angeles and cared for at the Sisters of Charity Hospital (see the 7 November 2011 post on that facility), the need (!) for a more comprehensive hospital became more pressing by the turn of the century, especially as the growth of the association through consolidation meant that care was extended to railroad workers from Albuquerque to San Diego to Los Angeles to San Francisco and points in between.

After a dozen years after accumulating the funds and five years after buying the property, situated on a little less than four acres just off the southeast corner of Hollenbeck Park, for $5,500, the Association completed, in December 1905, its Boyle Heights facility. The construction and equippng of the Mission Revival-style hospital, equipped with 150 beds, totaled just under $150,000 and the architect was Charles Whittlesey. The parcel's size also allowed for the creation of a park and gardens for patients to enjoy which convalescing. Almost ten years later, in early 1914, an annex was completed at a cost of $22,000.

As was the case with employees' work assignments, there was, however, racial and ethnic segregation at the hospital. A 1915 account noted that, "one section of the building is devoted to Mexicans, who receive the same tender care as do their English speaking co-laborers. They have attractive quarters with a pleasing outlook, and there usually is a full quota around the table in their private dining-room. " Another strange aspect was that patients diagnosed with tuberculosis were not just quarantined, but lived outside in tents, albeit ones that had lighting and heat.

About a dozen years after its 1920s reconstruction, the facility was renamed Linda Vista Community Hospital and used that name from 1937. By 1980, the Santa Fe Railroad decided that it was time to get out of the business of providing direct health care to its employees and sold the facility to a private company. The 1980s brought a transformation in Medicare reimbursements and the hospital suffered a decline in business, closing the emergency room by the end of the decade and then closing in 1991.

The site was slated for a variety of potential uses, including a new hospital, a rehab facility, a charter school, a senior care facility, and residential lofts, but designation on the National Register of Historic Places, as well as the City of Los Angeles's roster of historic-cultural monuments, in 2006 prevented its demolition. The facility does, however, get plenty of use, with 100 or more films and television shows shot there, but, as it ages and crumbles, the uses tend to be more of the horror film variety. And, of course, as an abandoned older structure, tales of hauntings are legion and such programs as the Travel Channel's "Ghost Adventures" have claimed the place is infested with spirits.

For an interesting Los Angeles Times article on the site, check: http://articles.latimes.com/2010/apr/04/local/la-me-hospital4-2010apr04
The photo above is a cabinet card photograph of the first hospital, taken probably shortly after its construction in 1905, and is courtesy of the Workman and Temple Family Homestead Museum, City of Industry, California. This post is contributed by the museum's Assistant Director, Paul R. Spitzzeri.

Posted by Boyle Heights History Blog at 11:15 AM 12 comments: