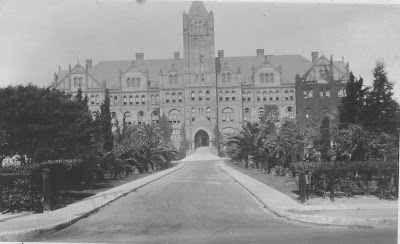 The Daughters, also commonly known as the Sisters of Charity and "God's Geese" because of their wing-like bonnets or wimples, then opened an orphans' home, also known as the Institución Caratitiva, in the Wilson residence, quickly adding a second structure the following year. These structures were at the corner of Alameda and Macy streets (Macy now being Cesar Chavez Avenue.) Interestingly, the Wilson house was a frame one brought to Los Angeles in sections by New York via ship around Cape Horn. Included with the 9-acre parcel was a vineyard of some 6,000 vines and a 300-tree orchard. A school for girls also was run on the property.

The Daughters were requested for the specific purpose of creating an orphanage by Bishop Thaddeus Amat of the diocese of Monterey, which included Los Angeles. Based in Emmitsburg, Maryland, the Daughters began their work in Gold Rush California, starting in 1852 in San Francisco. Then, the society sent Sister Scholastica Logsden and Ann Gillen from Maryland, as well as three women from Spain: Angelita Mombrado, Clara de Cisneros, and Francesca Fernandez. Sister Scholastica, who joined the order in 1839, helped found orphanages in New York City and Natchez, Mississippi during the ensuing decade.

Leaving New York in October 1855, the five women, traveling with Bishop Amat, took a 25-day trip to San Francisco and were received by the sisters there, remaining for several weeks before journeying down the coast to Los Angeles, where they arrived in early January of the following year. They stayed briefly with prominent Californio Ignacio del Valle until their new home was established. Sister Scholastica was the leader of the Los Angeles contingent and became a well-known and highly-regarded figure in the city.

Notably, after she died in 1901, a paean to her was penned by Boyle Heights founder William H. Workman and published by the Historical Society of Southern California and the Pioneers of Los Angeles County. Sister Scholastica, who died at age 88, was from Maryland and was well-known to James de Barth Shorb, whose family estate there was called "San Marino." Shorb married a daughter of Benjamin D. Wilson, which would appear to explain why Wilson's home was taken over by the Daughters for the first asylum.

In 1858, the Daughters proved to be so highly-regarded, that they were asked to create a hospital, which was operated first in a county-rented adobe (the county also provided some funding for the care of patients) just north of the Plaza Church owned by Casildo Aguilar, a prominent Californio politician, and which was under the supervision of Sister Ann Gillen for almost a quarter century. For the first decade, the hospital was adjacent to the orphanage until an 8-acre site was found on the northeast edge of town and a two-story brick infirmary built there. The hospital later became St. Vincent's.

Despite the best efforts of Sister Scholastica and the other Daughters, the orphanage suffered from a common chronic condition of many Los Angeles institutions in those years: a lack of sufficient funds. Orphans' fairs and other benefits and events were held to raise money for the asylum, and there were occasional small appropriations by the state, but it was very often tough slogging.

In 1869, the orphanage, which initially was restricted to girls but by then included boys, was incorporated as the "Los Angeles Orphan Asylum" (and the hospital as the "Los Angeles Infirmary"). Part of the reason for incorporating was to provide a stable management structure for the institutions, but a significant aspect was the question of ownership of the property. Specifically, there was disagreement about whether Bishop Amat should be considered the owner, as head of the diocese, or the Daughters, as managers of the facility.

As the population of the city surged during the later 1880s, the famed "Boom of the Eighties" being in full swing, the Daughters sought a new site. In 1889, to honor Sister Scholastica's fiftieth year as a Daughter of Charity, a fund was established that initially collected $3,000 for a new home for the asylum. A new site, purchased for $12,000, was located at 917 S. Boyle Avenue at what is now Whittier Boulevard, where, in early 1890 the cornerstone was laid. The following year, on Thanksgiving 1891, the imposing Romanesque-style structure, designed by the architectural firm of Curlett, Eisen and Cuthbertson (which also designed the Los Angeles County Courthouse, which was built around the same time) was finished at a cost of $150,000 and over 400 orphans were moved to the new facility.

The snapshot photograph above is of the Boyle Heights asylum, taken in September 1925. For over sixty years the facility served thousands of orphaned children in Los Angeles. Concerns over structural integrity came about in the early 1930s when construction crews blasting the hillside next to the asylum for the extension of Sixth Street weakened the massive structure's foundations. While the building was used for classes during the day, children and staff slept at the basement at St. Vincent's Hospital in the evenings.  This was followed by damage wrought by the 10 March 1933 Long Beach earthquake, as noted by commenter Ruth Suess, which led to her and other resident children being moved from the third floor to the basement.

The damage to the building, as well as the notorious freeway construction projects that controversially carved through much of Boyle Heights years later, led the Daughters to abandon the site and move the facility to Rosemead in the San Gabriel Valley. From 1953, the facility has operated as Maryvale, but has been reconfigured as a residential home for girls from ages six to seventeen. There are also adjunct facilities in El Monte and Duarte.  According to an architecture database (click here), the Boyle Heights facility was torn down "after 1957."

An excellent article on the history of the Daughters of Charity in Los Angeles is from Michael Engh's notable book, Frontier Faiths, and the excerpted piece can be viewed here: http://via.library.depaul.edu/cgi/viewcontent.cgi?article=1137&context=vhj.

The photograph is courtesy of the Workman and Temple Family Homestead Museum, City of Industry. Contribution by Paul R. Spitzzeri, the museum's Assistant Director.
Posted by Boyle Heights History Blog at 12:15 PM 47 comments: