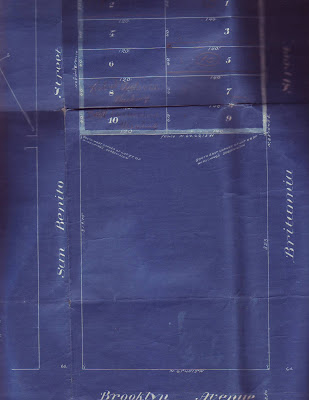 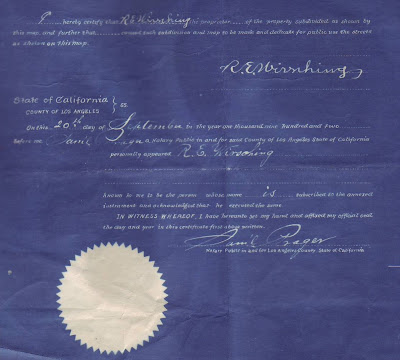 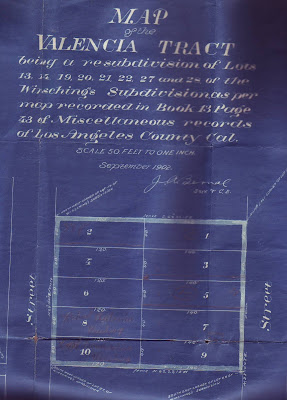 In April 2010, a post was dedicated to some historic photos of the Queen Anne-style residence of Robert Wirsching and his wife, Carlota Valencia, which still stands on Brittannia Street in Boyle Heights.

Recently, the Workman and Temple Family Homestead Museum in City of Industry acquired a rare 1902 tract map of the area around the Wirsching house. While Wirsching originally subdivided land he purchased some years before as "the Wirsching Subdivisions," he then went and created a ten-lot resubdivision denoted as "the Valencia Tract," that being his wife's maiden name.

The Valencia Tract is an area 323 feet north of Brooklyn Avenue (Cesar Chavez Avenue), which is at the bottom of the document and covering 200 feet of frontage each of Brittania Street to the east and San Benito Street to the west with the depth between the two streets being 260 feet.

The map was drawn by city surveyor and chief engineer, J. A. Bernal, and is dated 20 September 1902. Interestingly, while the controversial carving up of Boyle Heights in the post-World War II era meant that Interstate 5 and 10 sliced through the southwest corner of the land just below the Valencia Tract, the ten lots comprising the tract remained intact.

Notably, lots 8 and 10, both fronting San Benito and each measuring 40 feet wide and 120 feet deep (4800 square feet), have the names of two Wirsching sons, Robert and Carl. The rest of the lots, while having some markings (for example, two or three foot easements in a couple of them), do not have names of owners or intended owners.