Volunteers of America and the Maud Booth Home in Boyle Heights 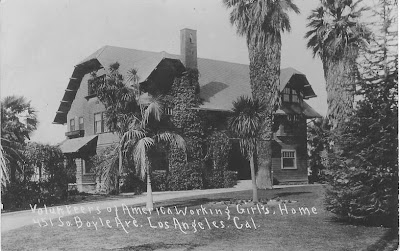 Back in spring 2010, this blog featured a post (see http://boyleheightshistoryblog.blogspot.com/2010/03/historic-houses-of-boyle-heights-joseph.html) on the 1882 house of Joseph M. Workman, cousin of Boyle Heights founder William H. Workman.

By 1895, however, Joseph Workman lost the house, located at 451 South Boyle Avenue, to foreclosure and the home was occupied by others, including saddler Allan Ball and his family in the 1900 census and Edward Magee and family who moved from Hanford in the San Joaquin Valley to reside in the house.

Meantime, across the street, on an East 5th Street address, George Chaffey, Jr., his wife Anna McCord and two sons, Andrew and John, lived in a large mansion overlooking Hollenbeck Park. Chaffey was born in 1848 at Brockville, Ontario, Canada to a shipbuilding (and namesake) father. He left school at the age of 13 to apprentice as a marine engineer and was known as a ship designer. In 1881, Chaffey came to California to visit his father, who had settled a few years previously in the new agricultural townsite of Riverside. By the end of the year 1886, George and his brother William established their own colonies at Etiwanda, Upland and (naturally named for their home province) Ontario. Using advanced hydroelectric systems powered by water from the San Gabriel Mountains, the Chaffeys created irrigation projects that allowed these communities to become citrus-growing centers for decades to come. The brothers also endowed a college that bears their name today and there is a public high school that is named for them, as well. By 1886, the Chaffey brothers relocated to Australia to work on irrigation projects and new colonies, but after over a decade "down under," George returned to California.

Upon coming back, Chaffey embarked on another irrigation project with the California Development Company to direct water from the Colorado River to the Imperial Valley of southeastern California. The contract was signed in 1900, shortly after Chaffey bought the Boyle Heights house on East Fifth mentioned above, and the project delivered its first water supply the following year. Subsequently, Chaffey became a banker and, in connection with his son, Andrew, opened an amazing twenty-five banks in the first two decades of the twentieth century, including the powerful California Bank. Chaffey even bought an Inyo County ranch and created the town of Manzanar in 1910 (three decades later, many Japanese-American residents of Boyle Heights and others were interned at a relocation camp there during World War II.) He continued actively working until his 80s and died in San Diego in 1932.

As to 451 South Boyle, George's son Andrew acquired the old Joseph Workman property and built a $9,000 Craftsman-style residence there in 1904. Their occupation of the house was, however, brief, as Andrew, his wife Maud and their two daughters joined George and Anna Chaffey in a new residence on Wilshire Boulevard east of Western. The early 1900s, in fact, saw a mass exodus of well-heeled residents of Boyle Heights to the newly-developing tonier neighborhoods of west Los Angeles. Later, Andrew and family relocated further west to the new wealthy enclave of Brentwood where the 1930 census reported their house to be worth $600,000.

Meantime, the Andrew Chaffey house was purchased by an organization called Volunteers of America. Founded by Ballington Booth, son of the creator of the Salvation Army, and his wife Maud, the VOA was established in 1896 to work with poor and disdvantaged Americans. Later that year, the association opened its first Los Angeles location near today's City Hall. A children's home was established a decade later in south Los Angeles, but as the work of the VOA grew, a new home for low-wage earning women was in the works. Through the efforts of local banker Newman Essick, who was on the VOA advisory board, the Chaffey residence was acquired and renovated. On 25 April 1913, the "Volunteers of America Working Girls' Home" opened with a public reception and receiving hours. The above real photo postcard shows the home at about the time of its opening.

The facility was established to serve up to forty women who earned less than $10 a week and, according to a Los Angeles Times article, provided them "ordinary comforts and wholsome [sic] food at a nominal figure to young women compelled to work on limited salaries." Rates were established at $3.50 to $4.00 a week for room, means, washing and sewing accomodations, although the Times article noted that "young women out of employment or tempoearily embarassed through sickness or lack of funds will be received." It also noted that "special attention will be given to young girls coming to Los Angeles from the surrounding towns in search of employment, who are without relatives or friends in the city."

By 1917, however, the Volunteers of America had changed the facility to the "Maud B. Booth Home for Boys and Girls." Notably, the first Booth Home was established just before the earthquake and fire in San Francisco and served to house thirty-three children displaced by that disaster. Later, there was a boys home on Vermont Avenue west of downtown, while, at some date prior to 1917, the Boyle Heights "Working Girls" facility had changed to a girls' home. A house and lot adjacent to the former Chaffey residence property became available, however, and was acquired by the VOA. With two large residences on almost three acres of land, the organization was able to shutter the Vermont Avenue facility and move the boys over to the newly expanded Boyle Heights site. Consequently, by the end of 1917, there was room for fifty boys, forty girls, and twenty infants and toddlers at the Booth Home, although there were then seventy-five children being cared for there. Interestingly, the VOA was careful to distinguish between their "home" philosophy and the institutions that typically served orphaned, disadvantaged, or delinquent children. Rather most came from households where parents were separated, divorced, or unable to work because of illness or disability.

The VOA planned for improvements over the years and, in the early 1920s, planned for a two-story annex to the facility in order to serve fifty additional dependents, improving the capacity to over 150. This annex was to include dormitories, a commissary, an auditorium for 300, offices and staff quarters and was to be constructed between the two existing residences.

The Maud Booth Home for Children was the updated name of the facility in the 1930s and it continued to function for both boys and girls through the 1950s, before becoming a boys-only home. By the time the Times ran a feature about the complex in 1957, the number of children served had dropped to only thirty, of which but eight were girls. The decline in clientele and difficulties in securing adequate public funding continued to affect the home. In October 1964, the fifty-eight year old facility closed its doors at 451 South Boyle.

Some three decades later, however, another organization working with the disadvantaged in Boyle Heights came to the site. PUENTE (People United to Enrich the Neighborhood Through Education) was founded by Sister Jennie Lechtenberg, a long-time teacher in Boyle Heights, as an educational institution for children and adults through the PUENTE Learning Center. With the old Workman/Chaffey/Booth Home property acquired by future Los Angeles mayor Richard Riordan, PUENTE moved from an East First Street location to ten portable trailers on the site. In 1995, a 40,000 square-foot complex was dedicated and named for Riordan, and has been serving the Boyle Heights community ever since (the organization also has a South-Central Los Angeles branch.)

It seems an appropriate, if uninteded, irony that the word PUENTE applies to the founder of Boyle Heights, William H. Workman, who came to California in 1854 and settled with his family on the ranch of his namesake uncle, William Workman. The name of the ranch: La Puente. Moreover, William Workman's son, Joseph, who owned 800 acres of the Rancho La Puente (now the unincorporated community of Bassett) built the first house at 451 South Boyle in 1882.