Boyle Heights and the Mexican-American War 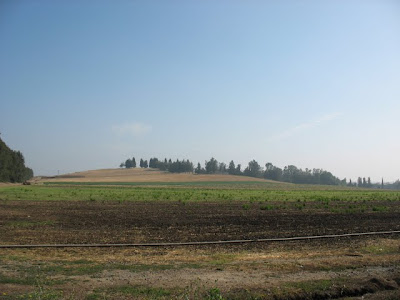 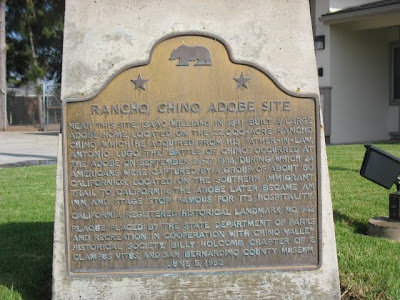 America's first war of imperialism, the Mexican-American War, reached Los Angeles in August 1846 when forces led by Commodore Robert F. Stockton (for whom the Central Valley city is named) quietly entered on the afternoon of the 12th and took possession of the town. Stockton remained in Los Angeles until September 3 when he departed by ship for the north and left a garrison of soldiers behind, led by Captain Archibald Gillespie. Gillespie immediately instituted a series of oppressive regulations, such as that all shops were to be closed by sundown, that no two persons could be seen congregating together in public, and that all liquor sales were to be approved by him. Within days, Californios formed a resistance movement and then besieged Gillespie and his guard at an adobe building known as "Government House" on Main Street, just south of the Plaza.

In the midst of this revolt, some Americans and Europeans, alarmed at the situation, left their homes and ranches and took refuge on September 26 at the Rancho Santa Ana del Chino, some thirty miles east of Los Angeles. These men included Benjamin D. Wilson (a future mayor of Los Angeles and state senator and for whom Mount Wilson is named); future sheriff David W. Alexander; co-owner of Rancho La Puente, John Rowland; brothers Isaac and Evan Callahan; Michael White; and a few others. The Chino ranch had been granted in 1841 to Antonio María Lugo, a prominent Californio and owner of the Rancho San Antonio (now Bell Gardens and surrounding areas), but Lugo turned the ranch over to his son-in-law, Pennsylvania native Isaac (Don Julián) Williams. According to Wilson, who came to Los Angeles in 1841 with a party of migrants, travelers and others often known as the Rowland and Workman Expedition, Williams assured the Americans and Europeans who came to his ranch that he had plenty of ammunition. When, however, these men arrived, Williams told them that Californios had just left having seized his weapons and ammunition. Wilson counseled his compatriots that they leave Chino and make their way to other refuges in the mountains or back in Los Angeles. As he expressed it,

the majority of them being new in the county had a very contemptible opinion of the Californians' courage and fighting qualities, and seemed to be of the erroneous opinion that a few shots would suffice to scare away any number of them that should come to attack us . . . I remarked that I hoped that they had not underrated the natives.

That evening, a force of what Wilson believed to be eighty to 100 men surrounded Williams' residence. Included in the contingent were several of Williams' Lugo brothers-in-law. One American, Isaac Callahan, volunteered to venture out and determine the size and strength of the group and was shot and wounded in the arm. After Wilson offered the opinion that a night-time break was a desirable option, he was shouted down.
The next day, the 27th, the Californios wasted no time in setting fire to the roof, which, in the typical fashion on the day, was made of brush coated with asphaltum (or brea, hence the use of Brea Canyon and the La Brea tar pits for this material to keep out the elements.) As the house burned, Cerbúlo Varela, commander of the besieging force, approached and quickly arranged a surrender, organizing a march to Los Angeles. A mile in to the movement west toward town, the group was halted by a disturbance at the rear, where, Wilson stated, there was an effort by some Californios to line up and execute the Americans. Varela quickly placed himself in the middle of the scene and ordered that nothing be done to the prisoners. According to Wilson, Varela's actions "made him worthy of our admiration and respect." In later years, Varela "became very much dissipated and really a vagabond," and, whenever he was arrested for drunkenness and disturbing the peace, Americans would band together to pay his fines and keep him from jail in gratitude for his actions at Chino.

Wilson then went on to state that "we all arrived that evening [September 27] on the Mesa south of town, now known as Boyle Heights, without any further occurrence, except the suffering and groans of my poor wounded men." Indeed, in the few exchanges of gunfire at the siege in Chino, Carlos Ballesteros, whom Wilson described as "among my best friends" was killed while charging the house (this was perhaps why some of the Californios wanted to execute the American and European prisoners.) As to those captured, four men were injured, two badly according to Wilson.

More notably, Wilson continued, "In 'Boyle Heights' we were all placed in a small adobe room." Unfortunately, he did not identify where this structure was. At the time, there were two families who owned what was then known as Paredon Blanco (or White Bluff, because of the bluff overlooking the Los Angeles River), these being the López and Rubio families. At any rate, a priest entered the room and volunteered to take confession, which led some of the prisoners to believe they were to be executed. The father, however, assured them that he was only there to minister to anyone's spiritual needs.

Soon, General José María Flores, commander of the general revolt against the Americans, came to the building and asked Wilson to take a letter to Captain Gillespie and warning the impetuous officer that an attack was imminent and would be devastating to the Americans. Instead, Flores offered to allow Gillespie to surrender, march his forces to San Pedro and take ship away from the area. He also induced Wilson to include in the letter his own assessment of the situation, which Wilson stated was to the advantage of the Californios. Gillespie immediately accepted Flores' terms, surrendered his arms, and marched the next day to San Pedro.

As for the prisoners, continued Wilson, "myself and associated were all marched into town" and held at a building on Main Street. Flores offered to release the men if they agreed to be peaceable and not take up arms against the Californios, but Wilson would not agree to the provision that this condition exist until the war between the United States and Mexico was over. Consequently, the men were held longer and Wilson claimed that Flores and Englishman Henry Dalton, who were brothers-in-law, concocted a plan to send the prisoners to Mexico. As a result, William Workman, co-owner of Rancho La Puente with Rowland, worked with Californios such as Ignacio Palomares, co-owner of Rancho San José, north of Chino in what is now the Pomona area, to attack Flores' headquarters and seized the general. Wilson went on that "Workman rushed into our prison bringing us the glad tidings that Flores was a prisoner, and in irons and his and Dalton's plot broken." Workman's nephew, William Henry, would, almost thirty years later in 1875, subdivide Paredon Blanco which he inherited through his wife from Andrew A. Boyle and create the community of Boyle Heights.

Palomares assumed command of the Californio forces, according to Wilson, and took the prisoners to Mission San Gabriel. An arrangement was made with Flores, who was allowed to resume his generalship, provided that Wilson and his compatriots were to be treated as prisoners of war and kept in the area. They were then taken back to the same structure in Los Angeles, where they'd been held, and kept there "with more kindness and allowed greater liberty. In early November, as Commodore Stockton prepared to recapture Los Angeles, the prisoners were taken to the Rancho Los Cerritos in today's Long Beach and which was owned by prominent merchant Jonathan Temple. Stockton, however, was deceived into thinking that the defending Californio force was much larger than it was as he prepared to land at San Pedro and he sailed to San Diego to get a larger invading force together.

The prisoners were again moved back to their Los Angeles prison and remained there until early January 1847 when Stockton's American force, augmented by a contingent led by General Stephen W. Kearney, marched by land from San Diego to Los Angeles. Andrés Pico, brother of California's recently-departed governor, Pío, and hero of a Californio victory against Kearney near San Diego, informed the prisoners that they were being released because of the impending battle, which took place over two days on January 8th and 9th. Wilson observed the battle of the 8th, which took place on the west bank of the San Gabriel River, now the Rio Hondo, from atop the Puente Hills between what is now Whittier and Hacienda Heights. It has been suggested that, after the Battle of La Mesa, on the 9th, the retreating Californios stopped at Paredon Blanco, while other sources suggest that the defeated soldiers went up the Arroyo Seco through modern Highland Park and into what became Pasadena before dispersing.

On the 10th, the Americans entered Los Angeles and, three days after that, Andrés Pico and John C. Frémont signed a treaty of surrender at Cahuenga Pass that effectively ended the Mexican-American War in California. Boyle Heights had a small, but significant, role in the events of that war in the region.
Benjamin D. Wilson's account, from an 1877 interview, was published by Powell Publishing Company of Los Angeles in 1929 as an appendix in the book Pathfinders by Robert G. Cleland. There is also some coverage of the Chino prisoners in Neal Harlow's California Conquered, published by the University of California Press in 1989.

The above photographs, taken in June 2010, show the site of the Rancho Santa Ana del Chino adobe house, now the site of Boys Republic, a private, non-sectarian school and treatment community for troubled youth in Chino Hills, and the California State Historic Landmark plaque for the the adobe, with the plaque (mentioning the Battle of Chino) located at a fire department training center adjacent to Boys Republic.