John Lazzarevitch: A Partner in the Founding of Boyle Heights 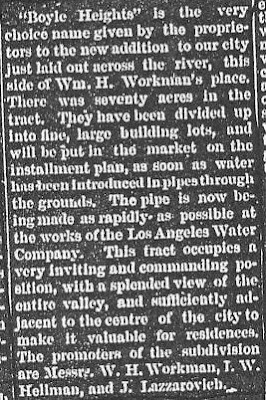 In the 8 April 1875 edition of the Los Angeles Evening Express, a small article, seen to the left, announced the subdivision of Boyle Heights by founder William H. Workman and his two partners, Isaias W. Hellman (see next month's post on him) and John Lazzarevitch. This latter, in fact, had a direct connection to the Lopez family, the settlers from the 1830s of Paredon Blanco, the area that became Boyle Heights.

Lazzarevitch was born in about 1830 in Dalmatia, along the eastern coast of the Adriatic Sea, in what was then Austria, later Yugoslavia and now the Republic of Croatia. It is not known when he came to the United States or to Los Angeles, although he was living in the town by 1866. Four years later, he was a grocer in town and had two sons, John and Stephen by his late wife Angelica Grivich.

An employee for a time in the Lazzarevitch store was Juan Jesus Lopez, son of Geronimo and grandson of Esteban, who built a Paredon Blanco adobe as early as 1837. Juan Jesus who later was well-known as foreman of the massive Rancho El Tejon in Kern County, worked in the store in 1867 and this may be how John Lazzarevitch came to know Maria Juana (Juanita) Lopez, a cousin of Juan Jesus.

Juanita was the daughter of Jose Francisco "Chico" Lopez and María del Rosario Ramona Almenárez and was almost fifteen years Lazzarevitch's junior, being born in February 1844. At age sixteen she married William Crossman Warren, who was born about 1836 on a farm in southwestern Michigan and may have lived in Wisconsin before migrating to California. In the 1860 census, taken in June, Warren was the deputy of City Marshal Thomas Trafford and was living with Trafford. Then, came his December marriage to Juanita Lopez. The couple had three daughters, born between 1865 and 1870. The eldest, Ida, was the mother of famed Los Angeles County Sheriff Eugene Biscailuz, who served in the office from the 1930s until the late 1950s.

In 1870, Warren was the City Marshal of the town but a dispute emerged between him and one of his deputies, Joseph F. Dye, over a reward that the latter claimed was stolen by the former. During the argument in the street in broad daylight, Warren pulled out a gun and fired first, leading Dye to respond in kind. Warren was killed, being the only Marshal or Police Chief ever to die in the line of duty, and Dye tried and acquitted on murder charges based on self-defense. Dye later went on to other acts of violence and was, in 1891, gunned down in, of course, the street in Los Angeles.

Juanita Lopez, a little more than a year after her husband's death, married Lazzarevitch in January 1872 and, by 1880 when the couple lived on Aliso Street, they had three children, William, Anne, and Rosa, born between 1873 and 1879 with only the son appearing to have lived to adulthood, while also raising the Warren girls and Lazzarevitch's sons from his first marriage. Two households up on the 1880 census was Juanita's sister and brother-in-law, Sacramenta and George Cummings (who, like Lazzarevitch, was born in the Austrian Empire), the latter of whom built the Cummings Block, which still stands at the northwest corner of Boyle Avenue and First Street.

As the daughter of Chico Lopez, Juanita had an interest in the Paredon Blanco land and this must be how Lazzarevitch came to be a partner in the Boyle Heights subdivision. It is not known at this time how involved Lazzarevitch was in the management of the community, it seeming that Workman and Hellman were more directly involved. Lazzarevitch appears to have lived quietly and seems to have died either in the 1890s or the 1900s In the 1900 census, Juanita was living with her daughter, Ella Warren Bacigalupi at her home on 103 S. Boyle Avenue in Boyle Heights, but was not listed as a widow although her husband was not there or found anywhere in Los Angeles listings. Also living in the household, incidentally, was 17-year old Eugene Biscailuz, then a stationery store salesman and still some years away from joining the Sheriff's Department. In 1910, Juanita was still with the Bacigalupi family, who had moved to what is now the Koreatown area of Los Angeles near Pico Boulevard and Normandie Avenue. Ten years later, she was with her older daughter, Ida Hunter, in the same general area and appears to have lived with her until Juanita's death in 1930.

John Lazzarevitch may have been something of a silent partner in the Boyle Heights subdivision, but his connections to the Lopez family, previous settlers of Paredon Blanco, are also an interesting part of the community's early history.

Posted by Boyle Heights History Blog at 10:49 AM No comments: