Origenes: The Founding of Boyle Heights 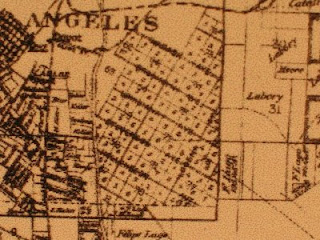 The neighborhood of Boyle Heights will mark its 135th anniversary in Spring 2010 with the founding of the community in Spring 1875 by William Henry Workman and his associates in honor of Workman's father-in-law, Andrew Boyle. There'll be more on this blog about the founders of Boyle Heights in coming weeks, but this entry focuses on newspaper documentation about the origins of the subdivision.

The April 8, 1875 edition of the Los Angeles Evening Express announced the formation of the community in a short article:

"Boyle Heights" is the very choice name given by the proprietors to the new addition to our city just laid out across the river, this side of Wm. H. Workman's place. There was seventy acres in the tract. They have been divided up into fine, large building lots, and will be put in the market on the installment plan, as soon as water has been introduced in pipes through the grounds. The pipe is now being made as rapidly as possible at the works of the Los Angeles Water Company. This tract occupies a very inviting and commanding position, with a splendid view of the entire valley, and sufficiently adjacent to the center of the city to make it valuable for residences. The promoters of the subdivision are Messrs. W. H. Workman, I. W. Hellman, and J. Lazzarovitch.

This was followed a little less than a month later by a short note in the Los Angeles Herald of May 4 that "in a short time the City Water Company will have their pipes laid to Boyle Heights, which Wm. H. Workman and others have liad out in city lots."

Another month or so brought a further update from the Express, in its June 12 edition:

Everything conspires to render the Boyle Heights addition to the city across the river one of the most desirable residence tracts yet placed upon the Los Angeles market. The Messrs. Workman & Co. have laid out a splendid series of streets, and the water will be introduyced in pipes from the City Walter Works to every part of the tract. We learn the pipe-laying will be commenced next week. The new street railroad franchise, granted by the Council at their last session, is in the hands of enterprising and capable men; and no time will be lost in connecting the tract by rail with the heart of the city. When the proprietors of Boyle Heights are ready to place their lots in market, we believe they will meet with a warm acceptance from the public.


The problem was that the public was soon confronted with crisis. Not unlike recent events in our time, 1875 was a year in which a growth boom in Los Angeles reached its pinnacle and also crashed spectacularly back to earth. Local speculation in real estate, in particular, was rampant and statewide a stock bubble centered in the silver mines of Virginia City, Nevada [near today's Reno] burst, causing the Bank of California, based in San Francisco and the state's largest bank, to collapse.

On August 24, when the thermometer reached a scorching 108 degrees, the telegraph relayed the news of the economic disaster to Los Angeles, precipitating a panic that drove depositors to the town's two commercial banks: Farmers and Merchants, run by Workman's Boyle Heights partner, Isaias W. Hellman and Temple and Workman, co-owned by Workman's uncle and namesake, William Workman. To stymie the demands of depositors, the banks suspended business and sought to regroup.

Farmers and Merchants, ably managed and well capitalized, survived and went on to flourish for decades to come. Temple and Workman, a private bank that was poorly managed and awash in bad mortgages and risky investments (hmmmm . . . sound familiar?), was unable to survive after a loan from San Francisco capitalist and Virginia City mining magnate Elias J. "Lucky" Baldwin was secured.


The failure of Temple and Workman worsened the economic malaise and, for the only time in its history, the population of Los Angeles declined. Like other mid-1870s boom towns, such as Pomona and Artesia, Boyle Heights struggled during these lean years, only to emerge with new life in the famous Boom of the Eighties, which brought another period of intense growth after a direct transcontinental railroad link to Los Angeles was finished in 1885. William H. Workman happened to be mayor of the city during the peak boom years of 1887 and 1888 and profited handsomely from the growth of Boyle Heights, even though this boom also crashed in a dramatic and emphatic fashion.

Still, for a couple of decades in the late 19th-century and early 20th-century, Boyle Heights was, in the words of the one of the articles quoted above, "one of the most desirable residnece tracts" in Los Angeles. While conditions have certainly changed, Boyle Heights continues to be a dynamic and vibrant part of the city.

The map above is from 1877 and is a detail of the area in and around Boyle Heights. The streets laid out at an angle are those of the tract and include Wabash, Brooklyn (now César Chavez), Louisiana (4th Street), Stevenson (Whittier Boulevard), and Hollenbeck (Olympic Boulevard). The double line to the left is the Los Angeles River and the straight single line at the right and at the bottom are city limits (Indiana Avenue being the easterly limit today.) The dashed line at the top is the road to San Gabriel.

In coming weeks, look for entries concerning neighborhood namesake Andrew Boyle and founders William H. Workman, Isaias W. Hellman, and John Lazzarovitch as the heritage of early Boyle Heights is explored in anticipation of its 135th anniversary next Spring!

Posted by Boyle Heights History Blog at 3:09 PM No comments: